And we're off! The pattern for Sock Sanity Round 2 is Komorebi from Life is Cozy. The name is from the Japanese word meaning, "sunlight coming through the leaves of the trees." Prior to this round starting I had narrowed down my yarn choices to 2 self-striping. I settled on using deep stash Quaere Fibre self-striping in the colorway Harajuku, which is likewise a Japanese word that refers to the street style popularized in the west in the early aughts. The colorway is super bright and vibrant and represents the modern Japanese fashion style wonderfully. I love the idea of combining these two juxtaposing aspects of Japanese culture! 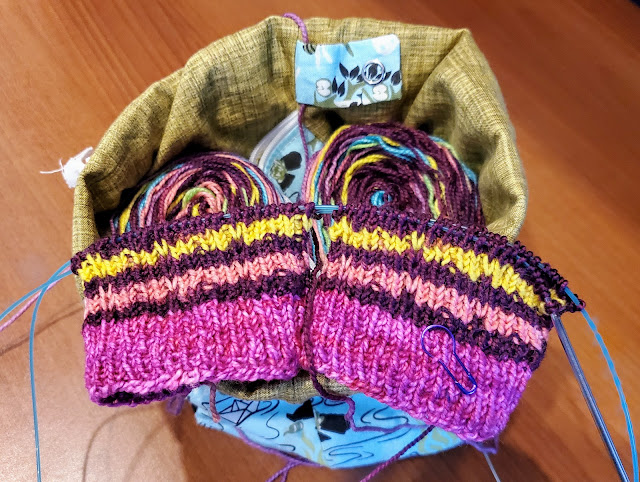 Since I'm using a self-striping yarn with a multiple color progression, I decided to try to get my stripes to line up as well as I can. To that end I did something which I rarely ever do when knitting my socks two at a time - I split my skein into two matching cakes when winding up. I wanted to ensure that the color progression would match on both socks, and since the progression is not the same from front to back, I could not just knit from two ends of the same ball. So I got my scale out and wound up 2 ~50g balls, ensuring the progression was the same for both.

Also, since I'm kitting from two different balls of yarn, I had to break out my project bag that is specifically designed for this! I have a sock sack from Sixmunchkin Stitching that is absolutely perfect for sock knitting! The inside compartment is divided for your two skeins to stay separate, and on the sides are two snap-fastened yarn guides to prevent tangling. Plus the center panel that separates the two yarn balls is actually a zippered notion pouch. This bag is the tits! 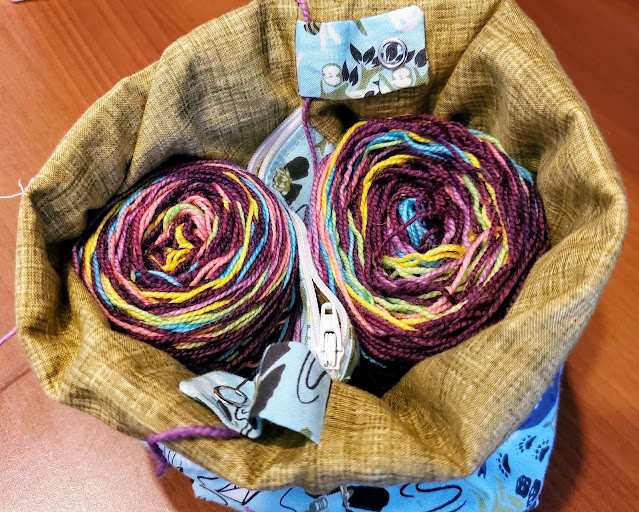 Now I just have to continue pressing forward, and the drive to reach the next stripe color is very motivating!