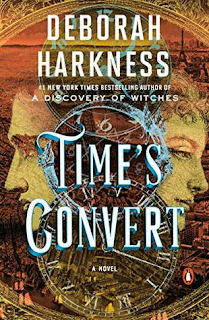 Time's Convert by Deborah Harkness
My rating: 1 of 5 stars

This was horrible. I was so excited. I love the All Souls trilogy, I love the American Revolution, Marcus and Phoebe's love story - all should have combined to a delightful spin off. Not so.

At once both plodding and exasperatingly incoherent, Harkness seems to start off describing events in great detail, only to lose interest and speed through days, months, years OF THE SAME STORY so that she can switch to a different story line.

Speaking of missed opportunities to develop the relationship between Marcus and Phoebe - the couple share hardly any time together. And when they do, the chemistry is almost nonexistent. Are we truly to believe this is how a mated couple interact? They seem more like strangers in this book than the All Souls story.

And my final gripe is the way Diana and Matthew's story is just sort of shoehorned into the mess that is the rest of the book. Speaking of absolutely no chemistry, I don't think we see more than once or twice of any sort of affection between the two. The story of the children growing again seems to have no bearing on the overall plot, other than to illustrate that Baldwin is still a douche, and it seems that Harkness needs a primer in the appropriate level of development for not-quite-two-year-olds because not a one that I have ever met can speak in full sentences with vocabulary as advanced as what is attributed to Rebecca and Philip.

The only characters that seem to have any personality in this book are Ysabeau and Freyja, and Gallowglass in his brief cameo. Oh, and Phoebe's sister Stella, who I just want to beat with my shoe (although that is entirely the point of her). Overall, this is just a massive disappointment of a book that had SO MUCH POTENTIAL and was so ineptly executed.