So it became pretty clear to me yesterday that I am not doing a great job managing the tension of my row-to-row yarn floats with the 4 colors trailing. In fact, way back in the first repeat of the pink stripe, my float between rows SNAPPED.

Deep breaths. Caaaaalm. Pick up the stitches and put them on holders and put it in time out to deal with tomorrow. The damage: 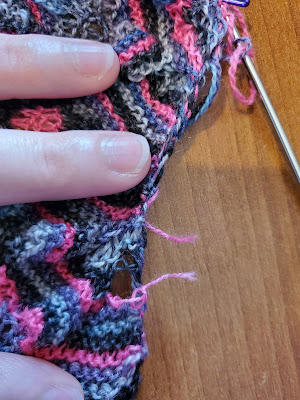 Okay, first, find the stitches that were dropped and give them a lifeline: 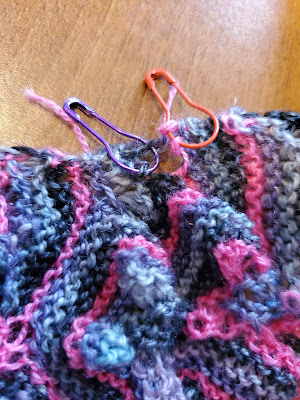 Now, to deal with the fallout. Well, typically when I have 2 live stitches that need a seamless join, I kitchener stitch them together. Seams reasonable (see what I did there?) 😂 Hilarity aside, grafting these stitches then overlapping the tails by weaving the ends in so that even if there is pulling after blocking seems the best path forward. Because if there were a knot or a break in the yarn when I was knitting it, this is exactly what I would have done anyway.

Now that logic has overcome the panic of my snapping yarn, let's get down to business! Let's load these stitches up on some needles, cut a length of spare pink yarn, and kitchner the shit of it (here's my favorite photo tutorial for this technique, by the way!) 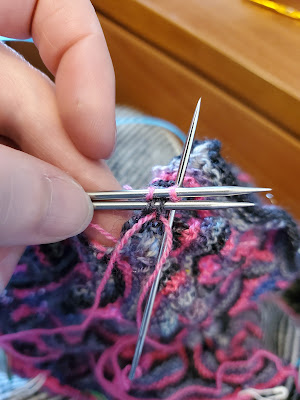 When I weave in my ends, I follow the stitch path of the knitting (rather than just looping through the garter bumps) to make it as unobtrusive as possible.  This also helps prevent any weird bunching or clumping when you're working in colorwork and lace. In this case, it makes my ends function basically as though I had knit two strands together to overlap one end with a new beginning. After doing this for about an inch and a half, I cut my tails but leave a little out because I know when I block it, it'll pull some of that leftover length into the stitches when they stretch and I want to make sure I have plenty of overlap. Here's the finished product, no worse for the wear! 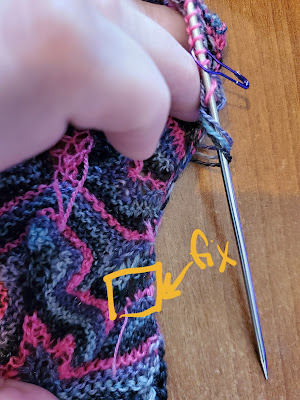